Once considered to be an unheard-of fringe diet, veganism is now experiencing a surge in popularity. Netflix documentaries, nutritionists, and food bloggers expound on the virtues of eating plant-based, and vegan-friendly fare is popping up all over the Twin Cities metro. It can be tough to eat out while avoiding animal products, so we’ve created a guide to help you stick to your meal plan while at the nation’s largest retail and entertainment complex, Mall of America.

Jamba Juice
While not substantial enough to qualify as a well-rounded meal, Jamba Juice’s delicious smoothies and bowls are a refreshing option for breakfast or a mid-afternoon snack. The acai trend has finally reached the Midwest, and Jamba’s offerings pack a whole lot of fruity flavor into a midsize bowl. Their fresh-squeezed juices range from Veggie Vitality, AKA V8 on steroids, to Tropical Kick-Start, which basically tastes like Florida in a glass.

Chipotle
The tried and true standby, Chipotle, offers one of the heartiest options for eating vegan at MOA®. A few years ago, the nationwide chain introduced sofritas, a spicy tofu offered alongside the standard chicken, barbacoa, and other meats. An example of a plant-based meal is a sofritas bowl with pico de gallo, lettuce, black beans, white rice, and a dollop of guac. It’s so similar to the “normal” meat-based order that you almost forget you’re eating vegan. Extra points for Chipotle’s mandate of organic-only ingredients.

Burger Burger
Vegans and carnivores can eat in harmony at Burger Burger, which now offers the gold standard of veggie burgers, the Impossible Burger. The five burger options containing this plant-based patty make Burger Burger one of the most veggie-friendly restaurants at MOA. And contrary to its name, the restaurant offers more than just burgers – several varieties of cauliflower wings, like buffalo, honey sriracha, and bourbon bbq, are available. Grab your meat-loving buds and head to a restaurant that everyone can agree on.

Masu Sushi and Robata
There’s nothing worse than a sad vegetarian “sushi” roll filled with only rice, cucumber, and a few carrot sticks. The section of Masu’s menu that’s devoted to vegetarian and vegan dishes will blow your plant-based sushi expectations out of the water. Try the veggie grasshopper roll, stuffed with crushed wasabi peas and avocado and tempura-fried, or tasty noodle dishes like tempura soba or kitsune udon.

Naf Naf Grill
Naf Naf Grill is the favorite Mall restaurant of many foodies and is best described as an Israeli Chipotle. Pick from a pita sammie, couscous, basmati rice, lettuce, or hummus as a base, then top with housemade falafel for a vegan-friendly meal. Naf Naf will blow your taste buds with flavors and toppings you most likely haven’t tried before, like Middle Eastern Pickles and the S’khug sauce. Bonus: every meal comes with a yummy pita on the side.

Hot Indian Foods
Local food truck Hot Indian Foods has garnered fans for its fun twists on classic Indian meals. HIF is slowly moving into the brick-and-mortar space and recently opened a new store in MOA’s Culinary on North. Get ready for yummy dishes like “Indurritos” (Indian burritos, duh), rice bowls, and tacos, along with vegan options for fillings. 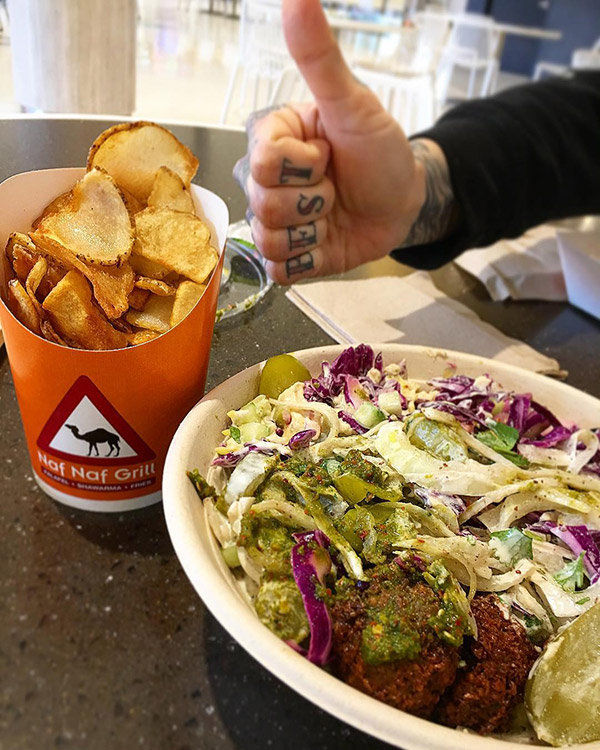 Naf Naf Grill. Panera Bread
A new initiative from popular fast-casual chain Panera Bread is making it easier for vegans to eat the way they want. Look for the plant icon on Panera's menu that designates vegetarian or vegan items, including the soba noodle broth bowl, steel cut oatmeal, and several dishes that can be made vegan with customizations.

Thai Express
Culinary on North’s Thai Express has a super flexible menu – just mention your vegan preference when ordering, and they’ll fully customize almost any meal to be free of animal products. This includes Asian staples like pad thai, pad see ew, and spring rolls, all of which go heavy on veggies without sacrificing taste.

Noodles World Kitchen
The Restaurant Formerly Known as Noodles and Company has undergone a major rebranding, including a new emphasis on special diets such as gluten-free and vegan. Try a fully plant-based dish (“zoodles” with asparagus and tomatoes) or dine on veg-friendly fare (spicy peanut sauté and Japanese pan noodles). Many of Noodles’ other offerings are easily made vegan with the removal of parmesan cheese.

Crave
Vegans all over the metro jumped for joy when local chain Crave rolled out a completely vegan menu. The restaurant offers by far the most veggie-forward options of any MOA restaurant, with options including sushi, pasta, soups, and more. Crave partnered with Minneapolis-based “vegan butcher shop” Herbivorous Butcher to provide plant-based meats and cheeses to diners.