Bloomington might already be well known for its hidden gems, ample parks, and Mall of America—but this foodie hub is a destination all its own. At the heart of Bloomington’s food landscape is a prominent taco trail, encompassing a large group of restaurants with offerings ranging from bona fide authentic to upscale modern.

Timeless Traditionals
A Bloomington staple for years at their two locations, El Loro is a family establishment with traditional options and large portions. Their amazing apps include Queso Fundido, Jalapeño Poppers, Super Chori Nachos, and Mini Flautas. Tacos are available with your choice of meat and a variety of toppings. Try the pick two or pick three combos to sample as much of the menu as possible.

For traditional food in a modern and stylish location, Taqueria y Birrieria Las Cuatro Milpas delivers. The full menu includes ceviche, dorados, street tacos, burritos, and more. The seafood options are extensive, and the agua fresca is a fresh companion to the simple, yet delicious menu.

Venture to Chevy’s Fresh Mex for food made from scratch using farm-fresh ingredients. Slow-roasted carnitas, carne asada cheese enchiladas, and mesquite grilled fajitas are just a few popular options on the Chevy’s menu. Have the authentic tamales with a hand-crafted drink (like a Rosé-a-Rita) or try something new from their seasonal menu.

Andale Taqueria y Mercado, located just across I-494 in Richfield, has authentic flavors in a cafeteria-style setting with a market attached. Andale’s street tacos, expertly seasoned beans and rice, and monstrous tamales are all top-notch choices. Be sure to try the huevos rancheros, sizzling fajitas, and chicken pattillo to see why this hot spot is one of the best-kept secrets in town.

Winner of three “Best of the Twin Cities” awards—Best Burrito, Best Cheap Eats, and Best Mexican Restaurant—Taqueria la Hacienda in Richfield is known for their mix of modern favorites and familiar classic dishes. Tacos here are served with cilantro, onion, salsa, and your choice of meat. For a meal to remember, try the famous tacos al-pastor and churronuts (churro donuts) for dessert. 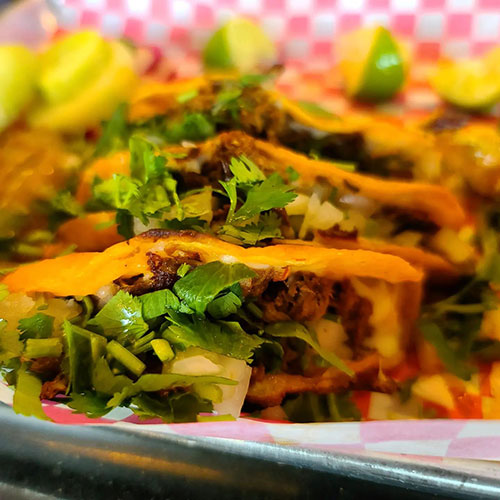 Part of a successful restaurant chain, Taco Libre is a cafeteria-style locale, complete with a salsa bar. The street tacos, American tacos, fish tacos, and quesabirria have gained a cult following. Unique menu item the Machete is an 18-inch masa tortilla filled with Oaxaca cheese, lettuce, sour cream, and your choice of protein. The empanadas, flautas, and tamales are worth a try as well, especially for guests of the nearby DoubleTree by Hilton Bloomington-Minneapolis South and Sheraton Bloomington Hotel.

Modern Takes on Classics
First and foremost, Mall of America houses three delectable spots to stop for a taco. Cantina Laredo is a stand-alone restaurant that offers a taste of modern Mexico. Start with their guacamole, loaded with charred jalapeño and queso fresco. Their traditional tacos are served with beans and rice and your choice of five meat options, including Impossible tacos with vegan meat and cheese. 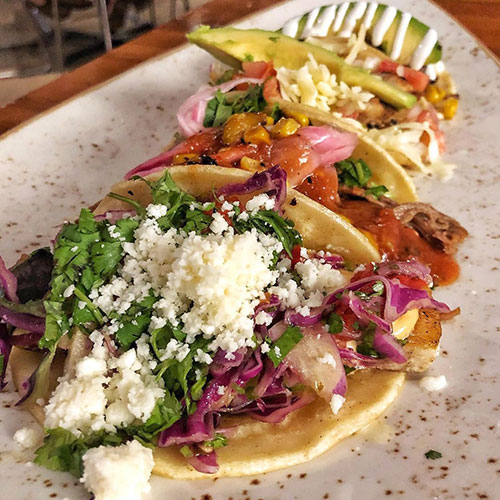 Tacos from Cantina Laredo Mall of America’s Culinary on North is getting a shake up in the former Hot Indian Foods location. The owners of the local brand have decided to switch it up to Bussin’ Birria Tacos, which features handmade dishes with in-house seasoning, including tacos, nachos, and quesadillas. Classic and modern plates are available, plus vegan, gluten-free, dairy-free, and halal options.

In nearby south Minneapolis, contemporary street food mixed with traditional Mexican ingredients await at Órale Mexican Eats. Their classic tacos stay simple with cilantro and onion, plus your choice of meat. Step outside the box and try the Filipino BBQ taco, loaded with shredded pork on corn tortillas, pickled onions, queso fresco, cilantro, and sliced jalapeño.

The owner of El Camino Gourmet Tacos, with locations in Edina and Burnsville, embraces his Mexican-American roots—which are reflected in the restaurant’s unique menu items. Tacos are served on either corn or flour tortillas with options ranging from the classic el primo beef taco topped with lettuce, tomato, and shredded jack, to the Rajas Taco with cactus, peppers, onions, poblano peppers, black beans, pico, lettuce, and avocado.

Turbo Taco
With both surf and turf menu options, the turbo taco with fresh battered cod and lump crab cake popper tacos have received the most attention. 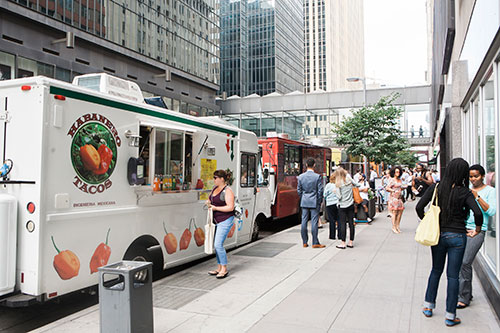 Que Chula es Puebla
Renowned for their quesadillas, huarache, and tacos arabes—and their cemita poblana is a gargantuan sandwich stuffed to the brim with meats and sauces.

Tacos El Primo
Supporting the restaurant of the same name, the truck has received high praise for their picaditas, flautas, and gorditas. 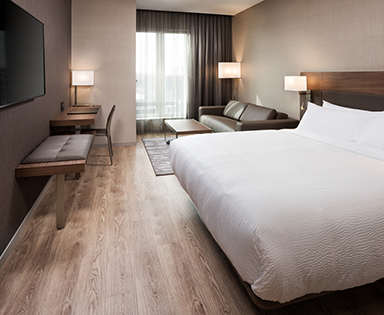 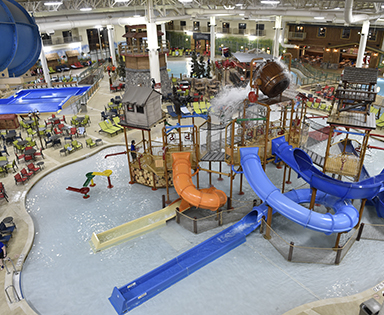